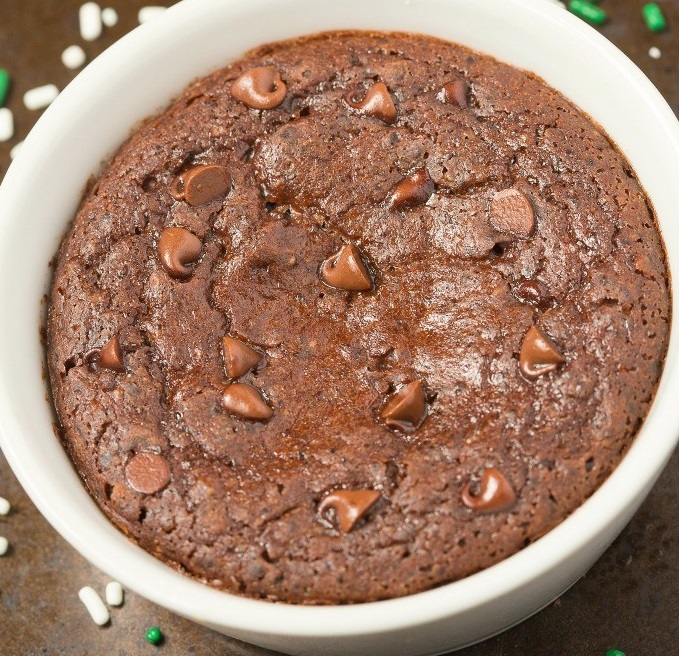 A delicious healthy chocolate brownie with a hint of mint which takes just one minute to make in the microwave but comes with a tested oven option too! So moist, fudgy and loaded with chocolate flavor, this quick and easy brownie is naturally gluten free, paleo, vegan and sugar free!

Friends, there’s been something on my mind lately.

I think I want to marry a carrot.

Okay, now while I let you ponder on the possibility of actually marrying a vegetable, let’s talk mint VS peppermint.

I was skyping with Niki the other day and amidst her current life dramas (she ripped her skirt, she accidentally wore flip flops to work instead of heels and how some guy told her she looked like Kim Kardashian’s ugly sister), I (stupidly) asked her if ‘peppermint brownie’ sounded better than ‘mint brownie’.

She would just brush her teeth before eating a normal brownie if she wanted some mint flavor.

You guys, this girl is something.

Anyway, we went into the debate of mint VS peppermint, so much that we were seeing if saying it in an English accent made much of a difference.

Anyway, what resulted was an on skype taste test of 3 flavors of chewing gum (sweet mint, mint and peppermint) for us to reach a solid conclusion- The sweet mint was barely minty but tasted the best; The peppermint was suitable for those who’d just eaten a cake made out of garlic. The classic ‘mint’ one was juuuuuuust right and would be the best marriage to something with chocolate.

So there. Mint Chocolate Brownie it is!

In full disclosure,  my sister’s commentary was not taken into consideration. She said that Starburst’s newest chewing gum range was delicious.

Before we get into today’s recipe, let’s see what the eats have been lately- A full day of eats from the other day!