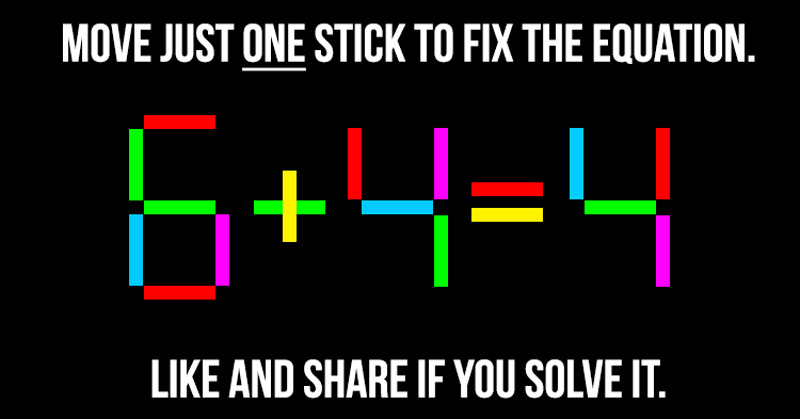 Math…you either love it or you hate it. But in today’s world, with the growing need of math skills, you need to learn to love it. Brainteasers are a tool that are designed to get you to find some appreciation in math and they often become addicting. One teaser that has gone viral has adults and children alike stumped.

The teaser has three numbers placed together in an addition equation…

The problem, which has four possible solutions, asks you to move one of the sticks to solve the equation. The color-coding display and easy numbers make the task seem simple, but it’s got people mind-boggled across social media.

One of the four ways to solve the problem is by transforming the six to a zero in the first number. By, simply moving the green line over to the right so that it is vertical, an entirely new equation is placed before you… 0+4=4.

Here are some more solutions…

Another fun way to solve the equation is by removing the yellow vertical stick from the plus sign, which in turn transforms the plus sign to a minus sign. Then, place this line on the upper right side of the six, turning the six into and eight and achieving the following accurate equation:

The next way to work wonders with this equation is by removing the blue vertical line from the six and placing it on top of the answer number at the far right. You will turn the line sideways so that it is now horizontal and it creates the number nine. Your end result will be:

The next solution is most challenging of them all, as it requires that you do the following:

Remove the yellow vertical stick from the plus sign and then place it vertically at the lower part of the first four. This will transform the equation into a double equation by showing: 6-1-1=4. Some consider this last solution to the problem as a way of cheating, but all that is required is the movement of the lines so technically, it’s not really cheating.

While some thought that brainteaser was challenging, others confessed how easy they thought it was…

“Easy..clever bit is working out a strategy otherwise there are many sticks to move and many positions to place them into. Strategy is: if you move a stick, the remaining sticks must form a valid digit. Then apply this rule to each digit in turn. You soon discover a stick on the left most digit that can be moved, then just decide where to move it. The fact is, for several digits, it doesn’t matter what stick you move, you are never left with a valid digit.”

“It’s hardly rocket science, is it?”

“If this is supposed to be hard then I’m a flipping genius.”

In any event, the teaser is a fun activity to engage in and does require some thinking and strategizing.

What’s for dinner? Here are 20 Weight Watchers Chicken Recipes with SP!
Here is How To Instantly Stop A Migraine With Salt
To Top