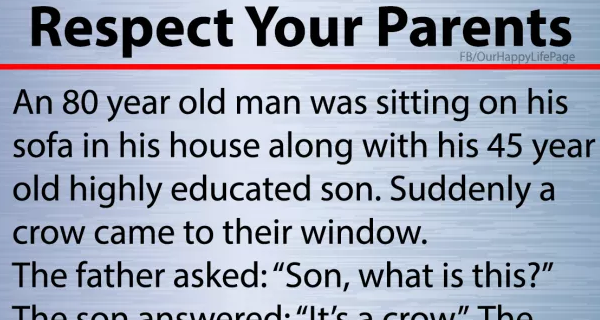 An 80-year-old man was sitting along with his 45-year-old son. All of a sudden a crow appeared on the window.

The father curiously asked his son what happened because he didn’t saw the crow at first. His son replayed “It is a crow”. After a short period of time, the father asked again “What is this?”

The son replayed “I just told you dad it’s a crow.” After a few minutes time for the 3rd time, the old men asked: “What is this?”
The son who now was feeling irritated aggressively answered. “It’s a crow, a crow!”

In only a few seconds time the father asked for the 4th time, “What is this?”

The son shouted, why you ask me so many times, I answered you again and again. ‘IT IS A CROW’, is that so hard to understand!
After that hot discussion, the father left and came back with an old tattered diary that he maintained since was his son was born.

He gave it to his son and told him to read a certain page. The son started to read:

“Today my little son aged three was sitting with me on the sofa when a crow was sitting on the window. My Son asked me 23 times what it was, and I replied to him all 23 times that it was a Crow. I hugged him lovingly each time he asked me the same question again and again for 23 times. I did not at all feel irritated I rather felt affection for my innocent child”.

While the little child asked his daddy 23 times the father didn’t felt irritated at all, but he answered each and every time with a loving and warm tone. However, the son couldn’t handle him after only 4 times.
CLICK NEXT PAGE BELOW TO CONTINUE READING …