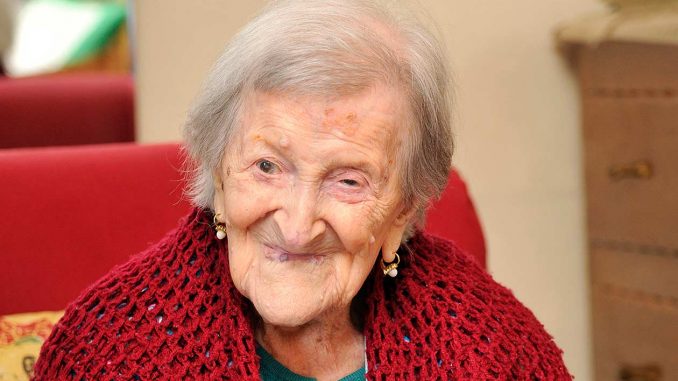 One year after a New York supercentenarian revealed she ate bacon every day, the Italian woman who succeeded her as the world’s oldest living person is opening up about her love of eggs — a daily part of her diet for almost a century. Born in 1899, Emma Morano will turn 119 next month. “I eat two eggs a day, and that’s it. And cookies. But I do not eat much because I have no teeth,” she told AFP news agency. The egg routine started with a health crisis when Morano was 20. Suffering from anemia, she consulted a doctor who told her to eat three eggs a day: two raw and one cooked, the agency reported. She’s kept that diet for more than 90 years, which would amount to consuming more than 100,000 eggs. “Emma has always eaten very few vegetables, very little fruit. When I met her, she ate three eggs per day, two raw in the morning and then an omelette at noon, and chicken at dinner,” her current doctor, Carlo Bava, told AFP. Eggs are a nutritional powerhouse, said NBC News Health and Nutrition Editor Madelyn Fernstrom. One egg has about 75 calories, 7 grams of high quality protein, 5 grams of fat, and 1.6 grams of saturated fat.

Eggs also contain 13 essential nutrients, including iron. They can contribute to healthy weight control, muscle mass, brain and eye function, Fernstrom noted. “While eggs have gotten a bad reputation because of the high cholesterol content — and many people have avoided whole eggs for many years — new science has resulted in revised dietary guidelines for egg consumption,” she said. Current recommendations allow moderate, not restricted, consumption, if you choose. So healthy people can have one egg a day, or about seven whole eggs a week, but always check with your doctor for personal advice on your daily egg intake, as well as for other sources of dietary cholesterol and particularly saturated fat, Fernstrom advised. You can consume as many egg whites as you choose, she added. Remember that brown and white eggs have the same nutrients. Same with cage-free, organic or other “specialty” eggs. Though if you choose to mimic Morano’s approach of eating raw eggs, make sure you’re opting for pasteurized eggs. If they’re not pasteurized, eggs can be a source of salmonella bacteria and should be avoided. Likewise, do not eat any foods containing raw eggs (like cookie dough, Caesar dressing and more).

Guinness World Records declared Morano the world’s oldest living person in May, noting that she is likely the last person born in the 19th century who is still alive. Morano succeeded Susannah Mushatt Jones, a New York woman who died on May 12, 2016, at the age of 116 years, 6 months and 6 days. It was Jones who loved bacon. Just because some centenarians can enjoy bacon and other vices without consequences doesn’t mean the rest of us can do the same, said Dr. Thomas Perls when the news about Jones’ habit came out. “The reason some people can get away with some of those behaviors that are bad for you is likely because they have protective genes,” Perls, professor of medicine and geriatrics at Boston Medical Center, and director of the New England Centenarian Study, told TODAY. “It’s the right combination of genes that makes these individuals rare… it’s like winning the lottery