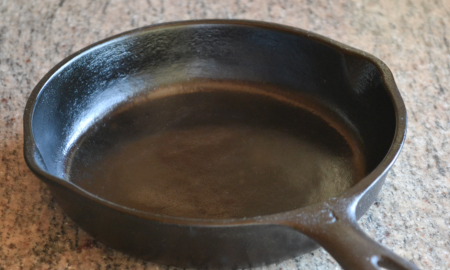 The old wives` tale is true. Cooking in a cast-iron skillet increases the body`s absorption of this important metal. If you have not yet discovered the benefits of cast iron cooking, here are 10 reasons to buy and use a cast iron skillet.

10 REASONS TO USE CAST IRON COOKWARE

1. It supplies you with Iron. Cast iron cookware is the only cookware that provides you with nutritional benefits. It releases a small amount of iron into food every time you cook. Cooking food with cast iron will help boost your iron levels especially when you are cooking with highly acid foods like tomatoes. 2. It is toxic free. Cast iron cookware is absolutely safe, unlike most non stick pans that release toxins into food once scratched (and they always get scratched). 3. Food comes out tastier. Not only does pre-seasoned cast iron cookware require less oil to cook with, but the food comes out flavored. You can get the best crust on your food and it simply tastes much better. 4. It is very durable. With proper care, cast iron cookware can last a lifetime. You can re-season and recondition it as many times as you want. 5. It’s inexpensive.  You can buy a new, pre-seasoned cast iron skillet for as low as $20.00.  That’s pretty cheap for a life time investment that even your grandchildren can inherit one day. 6. Easy to clean. Unlike other cookware, you don’t need to use soap when washing cast iron.  All you need is a non-abrasive sponge and hot water. 7. It’s been used for thousands of years. Cast iron pans have been used for more than 2,500 years. Cast iron was first made during the 4th century B.C. in China and later spread to England in the 12th century. Cast iron pans became popular in the United States during the 18th century. 8. It’s non stick. A properly seasoned cast iron skillet is naturally non-stick. This is because the oils from previous cooking have been built up which makes a natural non-stick coating on the pans. 9. Heating benefits. Cast iron cookware distributes heat very evenly. Most other non stick pans can not be used on high heat as their thin metal is not able to distribute heat quickly. 10. Can be used on your stove top, oven, or charcoal grill. Cast iron cookware can be used inside the oven and even on top of a charcoal grill as it can withstand various heating levels without causing damage to the shape of the cookware.

CLICK THE BLUE NEXT BUTTON BELOW TO CONTINUE READING … >

Don’t Throw Out That Stained Baking Pan. Here’s How to Make It Look New Again!
9 Pesticide-Filled Teas You Should Never Buy (and the kind you should)
To Top