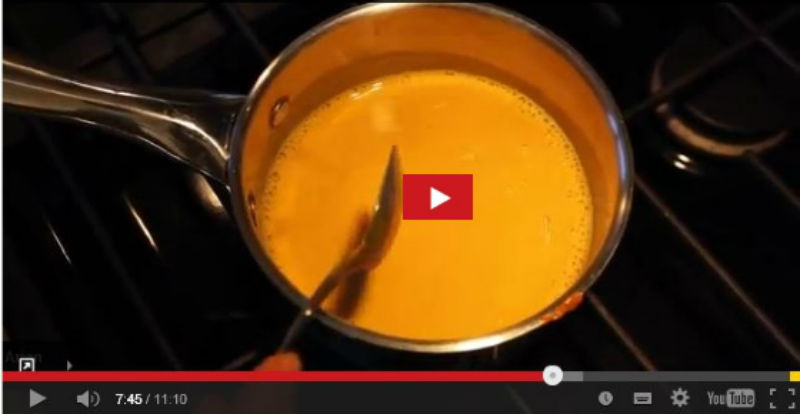 Golden milk is a delicious drink made from turmeric and it has many health benefits for the whole family. The two main ingredients in the golden milk recipe are turmeric and black pepper which are combined with water to make a yellow paste. Virgin coconut oil is added to the golden milk paste before incorporating milk into the mixture.

Golden milk is used as a natural remedy for a wide range of health issues. Some of the health benefits of this delicious golden liquid can help to reduce inflammation in joints, boost your immune system, maintain a healthy heart and cardiovascular system, help lose weight, and keep blood sugar levels in check. There is also evidence that turmeric has anti-cancer properties.

In this article, you will find one of the best recipes for golden milk along with some variations on how to adjust the yellow milk recipe to your taste. First of all, let’s look at the many health benefits of turmeric and coconut oil and see why the combination of these ingredients makes golden milk so healthy.

Why Golden Milk is so Healthy

All the health benefits of golden milk are mainly found in turmeric and coconut oil. Turmeric is a wonderful spice to cook with and adds color and taste to many dishes. The healing power of turmeric is found in the compound curcumin. Turmeric has also been used for centuries in Ayurvedic medicine for its anti-inflammatory, antioxidant, and antiseptic properties.

Black pepper is used in golden milk to boost the amount of curcumin the body absorbs. In fact, one study showed that by adding piperine (black pepper) to curcumin, the bioavailability of curcumin is increased by up to 2000%!1

The addition of virgin coconut oil to the golden milk recipe helps to boost the healing power of turmeric and helps the body absorb even more of the curcumin. However, coconut oil also has many health-boosting benefits of its own. It is antibacterial and antifungal and coconut oil can be used to treat many ailments. Coconut oil is a natural source of energy that helps to speed up metabolism.

Let’s look in more detail at the many health benefits of golden milk and see what scientific research says about the healing power of turmeric and coconut oil together.

The anti-inflammatory properties of golden milk are useful for treating many arthritic conditions like reducing joint inflammation and pain naturally.

A report in the journal Advances in Pharmacological Sciences found that curcumin reduces joint swelling and pain and can help treat rheumatoid arthritis. Turmeric’s anti-inflammatory properties also help to soothe the digestive tract and ease indigestion.2

One of the golden milk benefits is that it helps improve digestive health. Turmeric can help to reduce the symptoms of many gastrointestinal disorders like acid reflux (heartburn) and indigestion. Coconut oil also helps to soothe your digestive tract and relieve constipation when consumed.

The benefits of consuming turmeric extracts for digestive health were confirmed in a review on the therapeutic effect of curcumin. Researchers found that turmeric can help reduce abdominal cramping, stomach pain, and other symptoms of gastrointestinal diseases and bowel disorders.4

One important benefit of combining turmeric and coconut oil to make golden milk is its potential to improve cardiac function.

Some of the reported cardiac benefits of turmeric include reducing the risk of blood clots, having an antioxidative effect on blood vessels and your heart, and helping to keep a regular heartbeat.5

But that’s not all, both turmeric and coconut oil have proven heart benefits in helping to reduce cholesterol, lower blood pressure, and improve blood circulation.

A study published in the journal Nitric Oxide found that, in clinical trials, curcumin helps to boost blood flow and keep the cardiovascular system working effectively. Turmeric extracts also help to reduce oxidative stress, which is a contributing factor to heart disease.6

Other studies into the beneficial effect of coconut oil on cardiovascular health have shown similar effects. For example, research has shown that virgin coconut oil helps to improve blood flow and thus reduce hypertension.7

You can help control your blood pressure naturally by regularly drinking golden milk. The combination of coconut oil, turmeric, and black pepper in the yellow drink reduces hypertension and can help prevent strokes.

An important health benefit of golden milk made with turmeric and coconut oil is to reduce cholesterol. High levels of LDL (“bad”) cholesterol and low levels of HDL (“good”) cholesterol can clog your arteries and cause cardiac disease.

According to the American Heart Association, HDL cholesterol helps remove a buildup of plaque in your arteries and help prevent heart attacks and stroke.10

If you control diabetes by diet, then regularly drinking golden turmeric milk can help control your blood sugar levels. A regular intake of turmeric and coconut oil prevents spikes in insulin levels and can help to manage symptoms of diabetes.

Maintaining healthy blood glucose levels if you have diabetes is very important. The anti-inflammatory properties of golden milk can help suppress glucose levels in your blood. For example, the International Journal of Biochemistry and Biology reported that curcumin can induce hypoglycemia (lowered blood sugar levels) and increase plasma insulin levels.13

One of the many golden milk benefits is improving brain function. The antioxidant effect of turmeric helps to prevent degenerative brain diseases like dementia and Alzheimer’s disease. It can also help boost memory and reduce symptoms of anxiety.

Coconut milk contains fatty acids called medium-chain triglycerides (MCTs). These are quickly metabolized in the liver for energy and help ‘feed’ the brain.

Studies into both turmeric and coconut oil have confirmed their health-boosting benefits for the brain. Research published in the Journal of Research in Ayurveda found that regular supplementation of turmeric in the diet helped improve symptoms of Alzheimer’s disease in patients.15

Golden milk may even help to relieve symptoms of mild depression and anxiety. Turmeric extracts have antidepressant properties that can help to boost your mood and help you cope better with negative thoughts and feelings.

A study published in the journal Pharmacology, Biochemistry and Behavior reported that curcumin supplements stimulated the brain’s neurotransmitters to produce more serotonin and increase dopamine levels naturally. The researchers concluded that curcumin and piperine are effective in the treatment of depressive disorders.17

Another way that golden milk can make you feel better is due to its ability to relieve stress and lift your mood. Stress is something that we all have to cope with in our daily activities but too much prolonged stress can also have a negative impact on your health in general. The anti-stress effect of both turmeric and coconut oil in the golden milk recipe can help boost your brain’s function.

The journal Brain Research published studies on the stress-reducing effect of curcumin. Researchers found that curcumin helped to reduce the symptoms of chronic stress by stimulating the brain’s neurotransmitters.18 Also, research into coconut oil has found that the MCTs have anti-stress properties and increase the serum antioxidant SOD enzyme level in the brain.19

Drink turmeric golden milk with coconut oil to give your immune system a much-needed boost. If you regularly drink this yellow milk, you can help prevent infections and keep your body healthy.

The Journal of Clinical Immunology reported that the benefits of turmeric for keeping your immune system are a lower risk of developing allergies, asthma, Alzheimer’s disease, and diabetes.20 Because coconut oil is antibacterial, antifungal, and anti-inflammatory, it also gives your immunity an amazing boost.

One of the many reported health benefits of turmeric is its role in cancer prevention. It seems that the anti-inflammatory properties of curcumin can be effective against various cancers.

The anticancer properties of curcumin were reported in the journal Molecules. Researchers found that the antioxidant power of curcumin helped to “suppress initiation, progression, and metastasis of a variety of tumors.”21

If you are trying to lose weight, try drinking the yellow milk regularly to help slim your waistline. The combination of coconut oil and turmeric in golden milk can help shed extra pounds because it boosts your metabolism, reduces hunger pangs, and helps burn fat quicker.

One study from 2015, showed that regularly consuming turmeric helped reduce body fat in all participants and there were no reported side effects. The researchers concluded that curcumin can positively help with weight management in overweight people.22

Coconut oil can also help boost your efforts to get rid of extra pounds and look slimmer. The American Journal of Clinical Nutrition reported that the fatty acid content in coconut oil helped to reduce food cravings. For example, participants who took coconut oil in the morning ate smaller lunches. There were also reported positive effects on insulin response.23 Other studies have shown that coconut oil actually helps the body burn off fat quicker.24

After examining the many health benefits of regularly consuming golden milk, you will no doubt be wanting to know how to make your own “wonder tonic.”

First of all, you start out by making a golden paste from turmeric, black pepper, and water. The next step is to mix the golden paste with coconut oil and milk to enjoy a health-boosting drink.

For the golden milk paste you need the following ingredients:

To make the golden paste, please do the following:

The paste should keep in the refrigerator for up to 3 weeks. After that, it develops a metallic taste and should be discarded.

Please remember that turmeric has a very strong pigment and can easily stain clothes and work surfaces. So protect your clothes in case it bubbles out while cooking it.

Alternatively, you can make an anti-inflammatory and pain relief ginger turmeric tea.

To make golden milk from the turmeric paste, you will need the following ingredients:

The recipe for making golden milk is as follows:

The addition of oil boosts the health benefits of golden milk by supplying you with healthy fats and helping with joint lubrication and promoting cellular function. The oil also further increases turmeric absorption.

The drink has a nice golden yellow color, hence its name – golden milk.

A very small number of people have reported allergic reactions to turmeric. If you’ve never eaten turmeric, start with a small dose and observe your body’s reaction.

Turmeric is generally safe to consume in normal doses. However, because turmeric prevents blood clots and reduces blood glucose levels, you should consult with your doctor if you are taking medication for diabetes or to thin your blood.

For more information, please see my article on why turmeric should be avoided by these people.

Read my other related articles:
1. How to Make Anti-Inflammatory and Pain Relief Turmeric Ginger Tea
2. Kill Your Infections With This Natural Antibiotic
3. This Drink is a Medicine for More Than 60 Diseases

Here is a video showing how to make the turmeric golden milk.